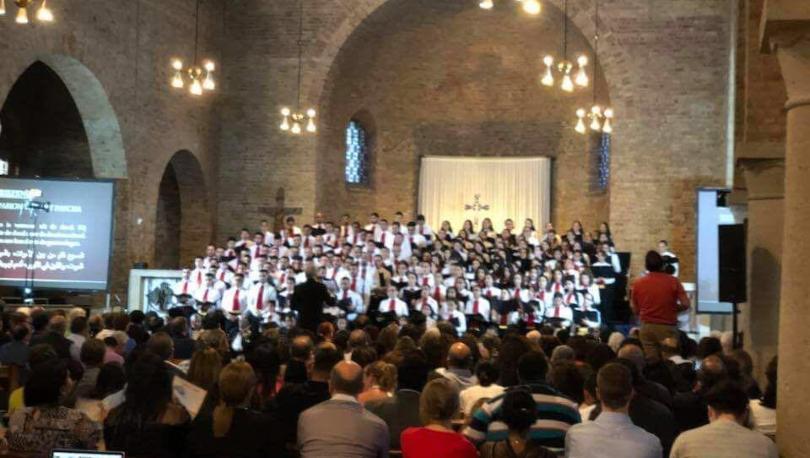 A Professional Testimonial on Our Choir

The Saint Kyrel Trust together with the Coptic Bishopric of the Netherlands organized a very special concert named “The Anointed Servant’, held in Bussum, Netherlands. The Saint Kyrel Trust is a Christian organization which helps Coptic underprivileged students in Egypt. Since 1993 more than 1360 poor university students received help from this foundation. One of the possibilities to get resources for this help is to organize concerts in different countries and different places in Europe. For this noble purpose a wonderful concert was performed in Bussum in the Sint-Vitus church. An extended choir, consisting of about 150 persons, boys, girls, men and women of all ages performed this concert together with few instrumentalists, playing on Arabic instruments. The big church was packed with a large number of guests, all interested in Coptic music and willing to support the project of the foundation. It was an impressive concert. The very disciplined choir had to sing a great number of Coptic hymns, alternating with soloists in the role of for example a narrator or the voice of Mary or an angel. His Grace Bishop Arsany recited the voice of Jesus Christ, a performance which he did with his experienced melodious voice. The choir performed all the long program with great concentration and in a perfect tuning while being assisted by a small orchestra on Arabic instruments.
There is only one small remark: from time to time the listener would wish to hear the sound of the voices of “a capella” only, without the constantly vibration of Arabic instruments. This could be done for example in the very old hymn “Golgotha” or the well-known hymn “O Monogenes”. But on the other side it is very well understandable that a non-professional choir of around 150 people needs some support for melodies and intonation. All in all the concert, conducted under the secure and skilful leading of the conductor Michael Henein was a great success. It was performed in the mind of Clement of Alexandria of the second century, hoe ordered to let make music merely for the Glory of God and with all singers, men, women and children with “one voice only”.
Magdalena Kuhn
Flutist/Coptologist, Leiden